In 2017, the number of international migrants reached 258 million; 30 million of them were children

zoom_out_map
Number of international migrants by age, 1990 to 2017 (in millions)

In 2017, the number of international migrants reached 258 million; 30 million of them were children

Origin and destination of international migrants

In 2017, 1 in every 76 children worldwide lived outside the country of his or her birth. Like adults, most children who move migrate primarily within their own regions. Globally, more than half of international migrants have moved to another country within the same region where they were born.

Approximately one quarter of all the world’s migrants were born in Asia and live in a different country within Asia; another 16 per cent of international migrants are Europeans who have moved within Europe. Owing in large part to its substantial share of the total population, Asia is also the region of origin for the highest number of migrants who leave their region of birth. In 2017, there were 42 million international migrants born in Asia but living outside of Asia.

zoom_out_map
Number of international migrants by region of origin and destination, 2017

Number of international migrants by region of origin and destination, 2017 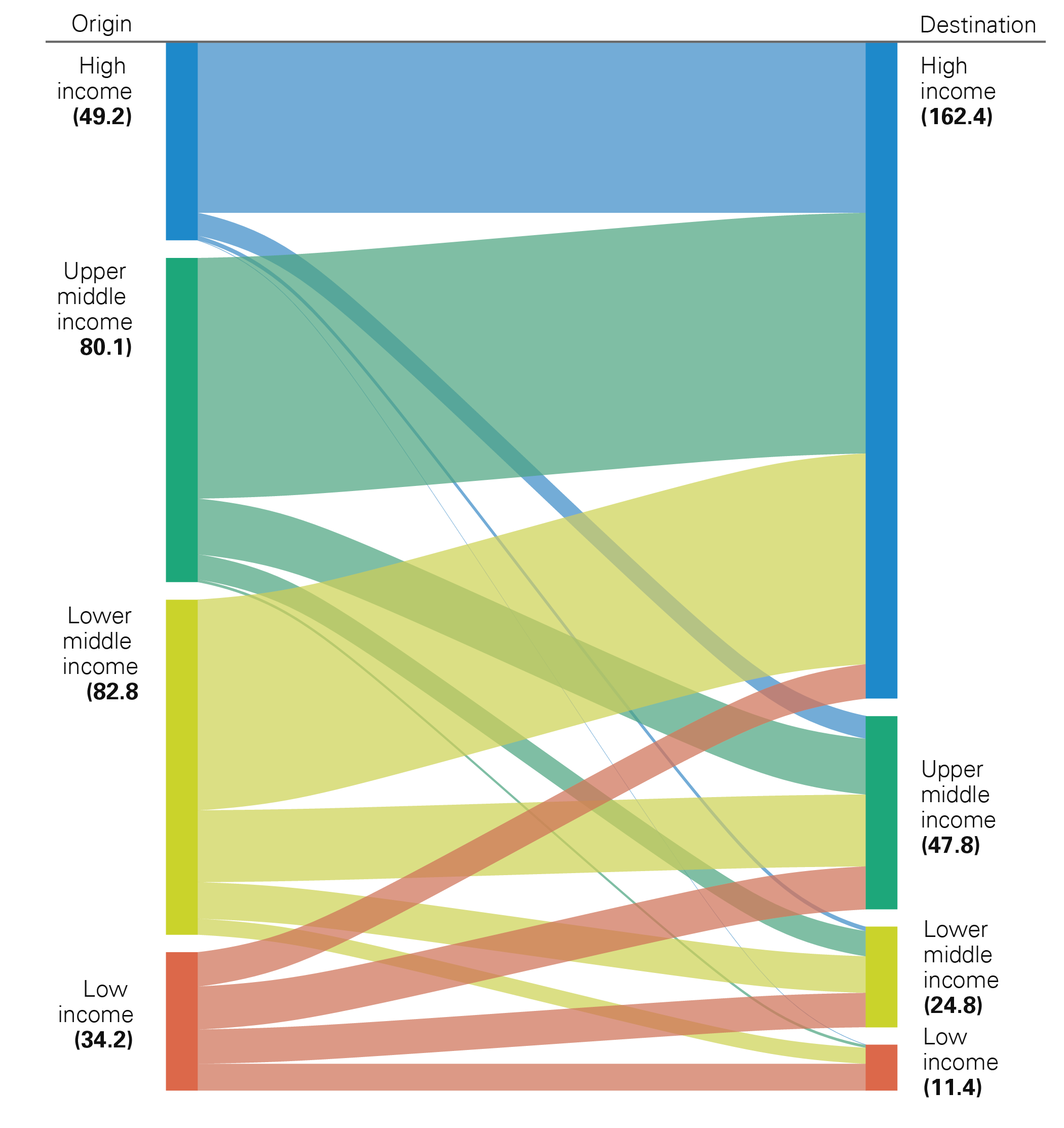 Where the world’s child migrants live

Nearly 13 million of the world’s international child migrants live in Asia. This represents almost 42 per cent of all migrant children, though it is actually much lower than Asia’s proportion of global child population (56 per cent of all children). Africa’s proportion of child migrants most closely matches its share of the global child population (21 and 26 per cent, respectively). Together, Africa and Asia host three out of every five child migrants.

zoom_out_map
B. Top 20 hosting countries of international migrants under 18 years of age, 2017 (in millions)

B. Top 20 hosting countries of international migrants under 18 years of age, 2017 (in millions)

zoom_out_map
C. Distribution of international migrant children and all children by region, 2017 (percentage)

C. Distribution of international migrant children and all children by region, 2017 (percentage)

While international migration receives substantial attention in the research and policy dialogue, it is only a small portion of overall population movements. A much higher percentage of the world’s population movements takes place within borders rather than across them. According to the most recent global estimates, by 2005, upwards of 760 million people had migrated within their own countries since birth, nearly four times as many people as had migrated internationally.

An estimated 326 million people – more than a quarter of the national population – had moved across India by 2007-2008.  That same year, 15 million children in India were estimated to be living as internal migrants within the country. That number is equivalent to roughly half the number of international child migrants in the world, underscoring just how vital continued analysis of and dialogue about internal migration is for the well-being of children.

A right to be heard – interactive dashboard

Data snapshot of migrant and displaced children in Africa

A Call to Action: Protecting children on the move starts with better data

Notes on the data

International migrants: Persons living in a country or area other than their country of birth.

Refugees: Person who are outside their country of nationality or habitual residence, who cannot return due to a well-founded fear of being persecuted because of their race, religion, nationality, membership of a particular social group or political opinion. This number only accounts those who have been recognized as refugees or find themselves in refugee-like situations. Data are presented in thousands.

Asylum seeker: Persons whose application for asylum or refugee status is pending at any stage in the asylum procedure. If granted, persons are regarded as refugees. Data are presented in thousands.

Internal displaced persons: Persons who have been forced or obliged to flee or leave their homes or places of habitual residence, in particular as a result of or in order to avoid the effects of armed conflict, situations of generalized violence, violations of human rights or natural or human-made disasters, and who have not crossed an internationally recognized border. Data presented in this table refer only to persons displaced due to conflict and violence. Data are presented in thousands.

Ratification of legal originating from instruments related to children and international migration: Number of legal instruments related to children and international migration ratified by each country. The legal instruments refer to: (a) the 1989 Convention on the Rights of the Child, (b) Convention relating to the Status of Refugees 1951 and Protocol 1967, (c) the 2000 Protocol to Prevent Suppress and Punish Trafficking in Persons, Especially Women and Children (d) the 2000 Protocol against the Smuggling of Migrants by Land, Sea, Air, (e) the 1990 International Convention on the Protection of the Rights of All Migrants and Members of Their Families. Data are expressed in numbers.

Comparable, reliable, timely, disaggregated and accessible data are essential for understanding and addressing the implications of migration for children and their families. Data need to cover a range of key questions, including who migrants and displaced persons are, how old they are, where they come from, when they move, where they move, why they move and how they fare.

A first step toward closing the data gaps about child migrants and refugees is identifying who and where those children are. Accounting for migrant children – especially refugee children – is fundamental for their protection. Beginning more than a decade ago, UNHCR declared unequivocally that  “the registration of children should always be a priority when registering persons of concern to UNHCR”. More consistent efforts to identify the origins and destinations of child refugees are also needed, including through the adoption of consistent and reliable techniques for determining the ages of children who arrive without documentation.  Population registers and censuses are essential tools for closing some of these gaps, particularly for non-refugee migrant children. As the predominant data source on international migration, every census should collect information on the country of birth, the country of citizenship, and the country of previous residence for respondents.

A second and equally important step toward closing data gaps is improving information about the well-being of children impacted by migration and displacement. Outcomes related to water and sanitation, education, gender, child protection, social inclusion and health need to be assessed for migrant and refugee children and considered in relation to the outcomes to native-born children. Data disaggregated by migratory status will be particularly relevant to monitor progress toward the Sustainable Development Goals addressing children and families in vulnerable situations. To bolster the overall quality of information about the well-being and progress of migrant children, pertinent administrative data should be more accessible and household surveys should be adjusted to include relevant migration questions. New technologies and data sources also have tremendous potential to improve current knowledge about migration movements. Data from social media, mobile phones and other sources can provide geo-spatial and temporal information about population movements in real time, facilitating timely and more relevant responses for people on the move. Continued investment in both new and traditional data sources will be essential to effectively meeting the rights and needs of children and families in the years to come.