A Right to be Heard

Listening to children and young people on the move 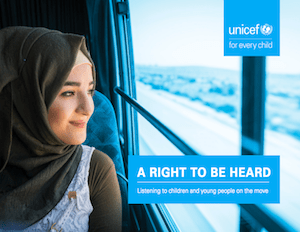 For many uprooted children, the journey from home can be profoundly lonely and plagued by challenges that put their health, education and futures at risk. Nearly 40 per cent of the migrants and refugees aged 14–24 who participated in the poll said they received no help at all during their journey in search of a safe and a better future – not from family, not from friends, not from institutions. About 40 per cent said they travelled alone. Nearly half reported that they did not see a doctor when they needed one. Eighty per cent of those who left their home countries because of war, conflict or violence described missing valuable time in school.

These insights were provided as part of a poll conducted in September and October 2018 by UNICEF through U-Report, a social messaging tool for young people. The questions were sent digitally to U-Report users around the globe, and about 4,000 migrants and refugees aged 14–24 responded. The goal of the poll was to encourage children and young people to speak out about their experiences so their voices could be heard and heeded.

Percentage of respondents aged 14–24 by source of help received

Far too often, millions of uprooted children and young people are invisible in data. Many do not have access to national or local services and fall through the cracks of child protection systems as they cross borders. Indeed, data are scarce, and little is known about young migrants’ health, their education, or how migration affects their futures.

“Education is the most valuable thing in life to change you and take you to another level.”
– 23-year-old, South Sudan

“You have to fight for what you want and live in a place where you are not repressed by your thoughts.”
– 22-year-old female, Brazil

“Xenophobia and the phobia of poor migrants are a barrier at the labour level, even when you are young and
qualified academically.”
– 19-year-old male

“Life is short. You have to realize your dreams as long as you can, whatever the danger.”
– 20-year-old, Ghana

Millions of young migrants and refugees have the potential to be great innovators, job creators, skilled workers and pillars of families and communities around the world. Connecting them with the information and services they need to start off in a new home – including education, health care and protection – is an investment in their future and the future of nations around the world.

It is time to turn words into action by making the investments needed to protect uprooted children and secure their rights. UNICEF is calling for action to:

At the heart of UNICEF’s work in support of migrant and refugee children and young people is the six-point agenda for action:

Uprooted journeys: The role of an object (Photo Essay)

Millions of children have migrated across borders or been forcibly displaced. As of 2016, 28…
keyboard_arrow_right Read more

UNICEF calls for action to help protect every child uprooted by war, violence and poverty.