Worldwide, about 36.5 million children had been displaced as consequence of conflict and violence as of the end of 2021

This number includes some 12.5 million child refugees (10.8 million refugees under UNHCR mandate and children from Venezuela displaced abroad[1], and 1.8 million Palestine children registered as refugees with UNRWA[2]), around 1.2 million asylum-seeking children and an estimated 22.8 million children displaced within their own country by violence and conflict. On top of those numbers come another 2.4 million more children living in internal displacement as consequence of natural disasters.

Between 2005 and 2021, the global number of child refugees under UNHCR mandate more than doubled from four million to more than 10 million[3]. In the period between 2010 and 2021 alone, the number of these child refugees shot up by 132 per cent. By comparison, during (almost) the same period[4] the total number of non-refugee child migrants rose by only 10 per cent.

[2] In total, 5.8 million Palestine refugees are registered in Jordan, Lebanon, Syria, Gaza, and the West Bank) with the United Nations Relief and Works Agency for Palestine Refugees in the Near East (UNRWA). These refugees are outside of the mandate of UNHCR.

Note: This figure includes child refugees under UNHCR’s mandate, and Palestine children registered as refugees with UNRWA in Jordan, Lebanon, and Syria (but excluding West Bank and Gaza).

The age distribution of refugees is markedly different from that of international migrants — the refugee population is much younger than the overall immigrant population. While a clear majority of the world’s migrants are adults, children are roughly half of all refugees. Children’s large share of the refugee population is further evidence of the fact that they continue to bear the burdens of decisions and disasters far beyond their control.

The refugee population is much younger than the overall migrant population

Where the world’s refugees come from

While planned and voluntary journeys can offer new opportunities to the children and families that undertake them, forced migration often intensifies the vulnerability of children who are already in precarious situations. Violence and conflict are the hallmarks of too many childhoods and are a common denominator in nearly all the countries of origin for large numbers of child refugees. In 2021, just three countries – Syria, South Sudan and Afghanistan – accounted for about half of all child refugees in the world; three-quarters of all child refugees come from only eight countries.

Number of refugees by age and country of origin, 2021 (in millions) 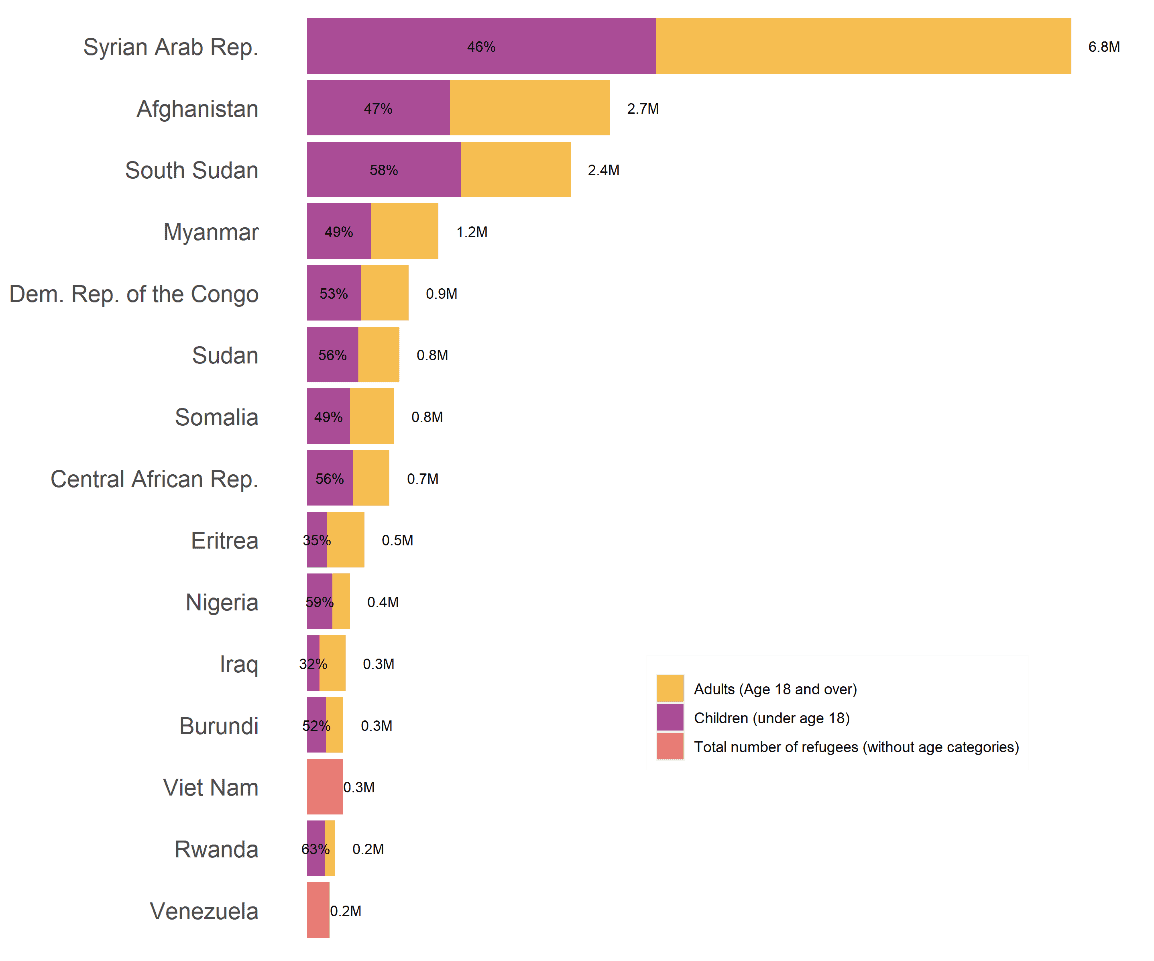 Note: Refugees under UNHCR mandate. Additional 5.8 million Palestinian refugees registered with the UNRWA are not included and plotted. Age categories shown only for countries with sufficient quality of information on age (i.e. age disaggregation available for at least 50 per cent of refugee population).

Where the world’s refugees live

Refugees often found asylum close to their country of origin. Worldwide, 79 per cent of all refugees find asylum in a directly bordering country, 83 per cent within their own region. Nine out of ten largest hosts of the global refugee population are in Asia and Africa, with Germany being the only exception. Türkiye hosts by far the largest total number of refugees. In 2021, one in six of all child refugees (under UNHCR mandate) lived in Turkey, most of them having arrived from Syria – making it the largest single host country of child refugees in the world.

Largest refugee populations by country of asylum and age, 2021 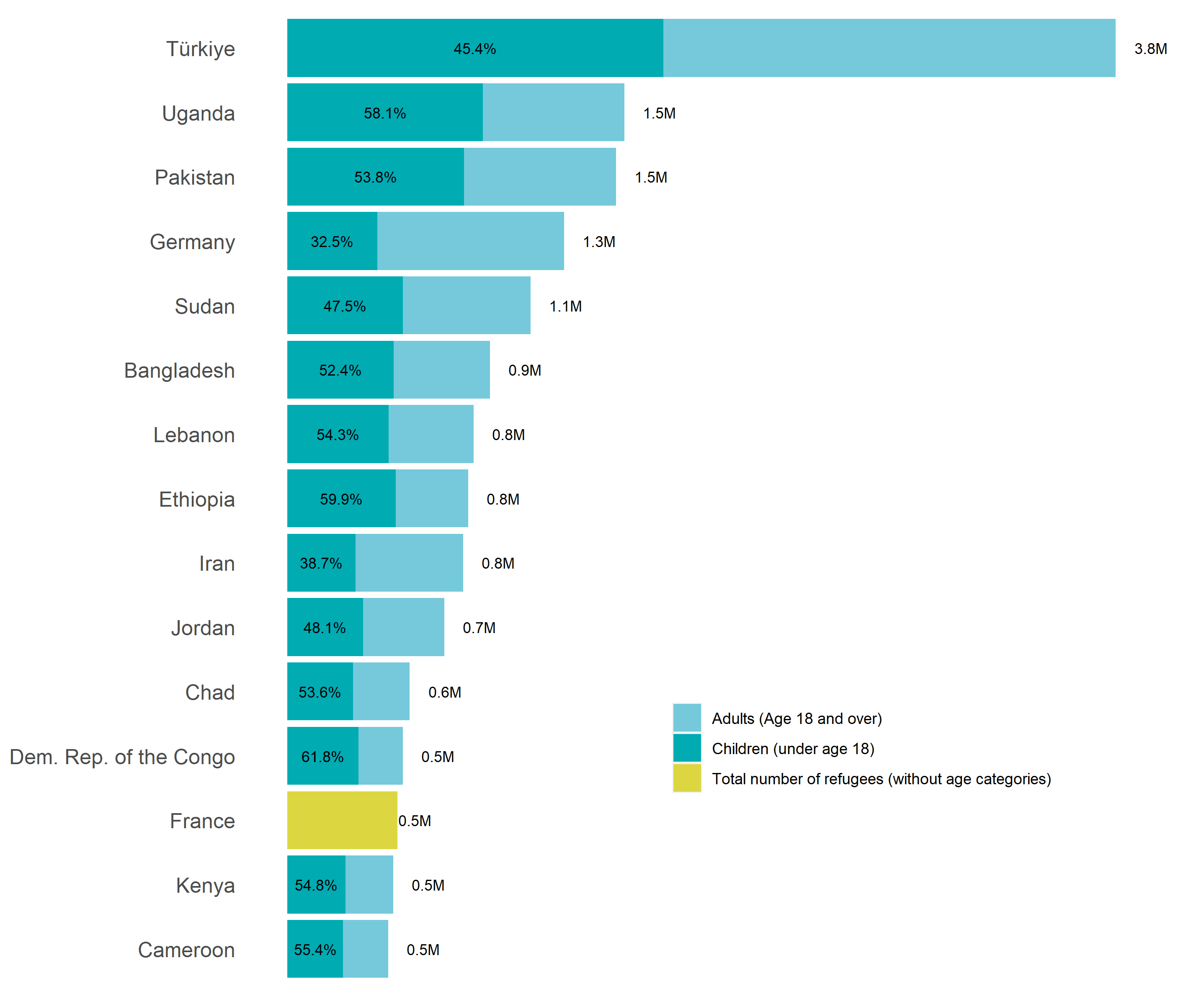 Note: Refugees under UNHCR mandate, only. Additional 5.8 million Palestinian refugees registered with the UNRWA in Jordan, Lebanon, State of Palestine and Syria are not included. Age categories shown for countries with information on age for at least 50% of the refugee population.

By an overwhelming margin, Lebanon hosts the largest number of refugees relative to their population (126 out of 1,000 people) followed by Jordan (69 out of 1,000) and Türkiye (44 out of 1,000). Today, nearly one in seven people in Lebanon is a refugee. By comparison, the same ratio for the United Kingdom is 1 in 499; for the United States, it is 1 in 984. When the over half a million Palestinian refugees living in Lebanon are added to this total, Lebanon’s contributions to global refugee responsibility-sharing are even more pronounced. 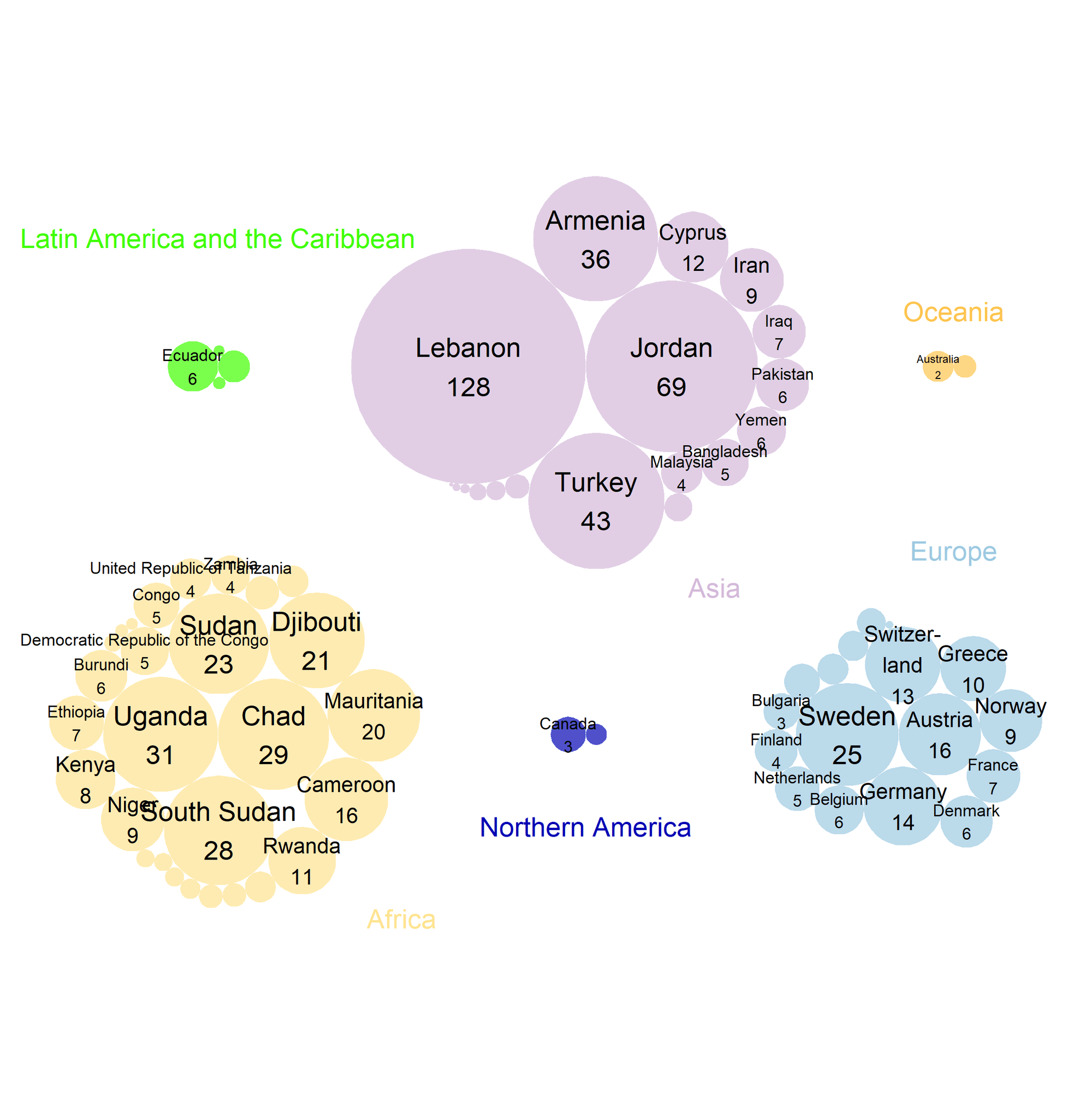 Note: Refugees under UNHCR mandate. Additional 5.8 million Palestinian refugees registered with the UNRWA in Jordan, Lebanon, State of Palestine and Syria are not included.

Even when children do not cross their national borders in search of safety, they can face tremendous danger while seeking security within their own country. Notably, nearly all people who eventually become refugees begin their journeys with internal displacement.

By the end of 2021 some 53 million people were living in displacement due to violence and conflict within their own countries -many of them since years. During 2021 alone, over 14 million new displacements were recorded. In the same year, disasters including earthquakes, tsunamis, and flooding led to another 24 million internal displacements.

Like in many areas of data related to migration and displacement, most information about internal displacements is not broken down by age, making it difficult to provide a reliable estimate about the number of children included within these larger totals. Assuming that the proportion of children among the internally displaced population is the same as the proportion of children in the national population, an estimated 22.8 million children were displaced within their own countries by violence and conflict at the end of 2021. This means conflict displaces even more children within their own borders than beyond them. If children are over-represented in internal displacement the same way they are among refugees, then their total would be even higher. Most of these displaced children lived in sub-Saharan Africa. The Middle East and Afghanistan are other hot spots for conflict related internal displacement.

An additional 2.4 million children were displaced as consequence of natural disasters.

Conflict resulted in 22.8 million children living in displacement within their own country at the end of 2021

Number of internally displaced children (IDCs) by cause of displacement, 2021 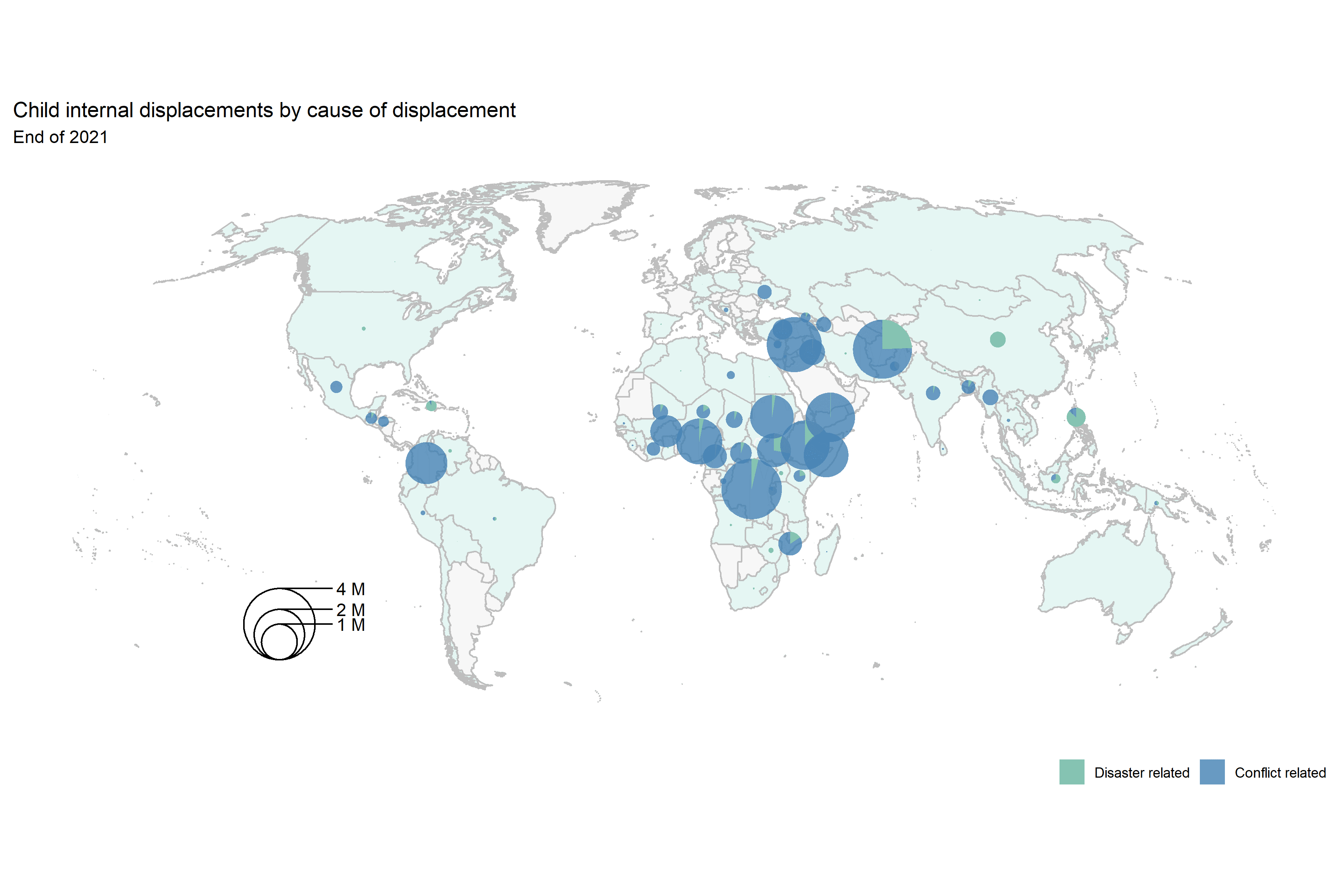 In 2021 alone, there were an estimated 14.1 million new displacements of children globally 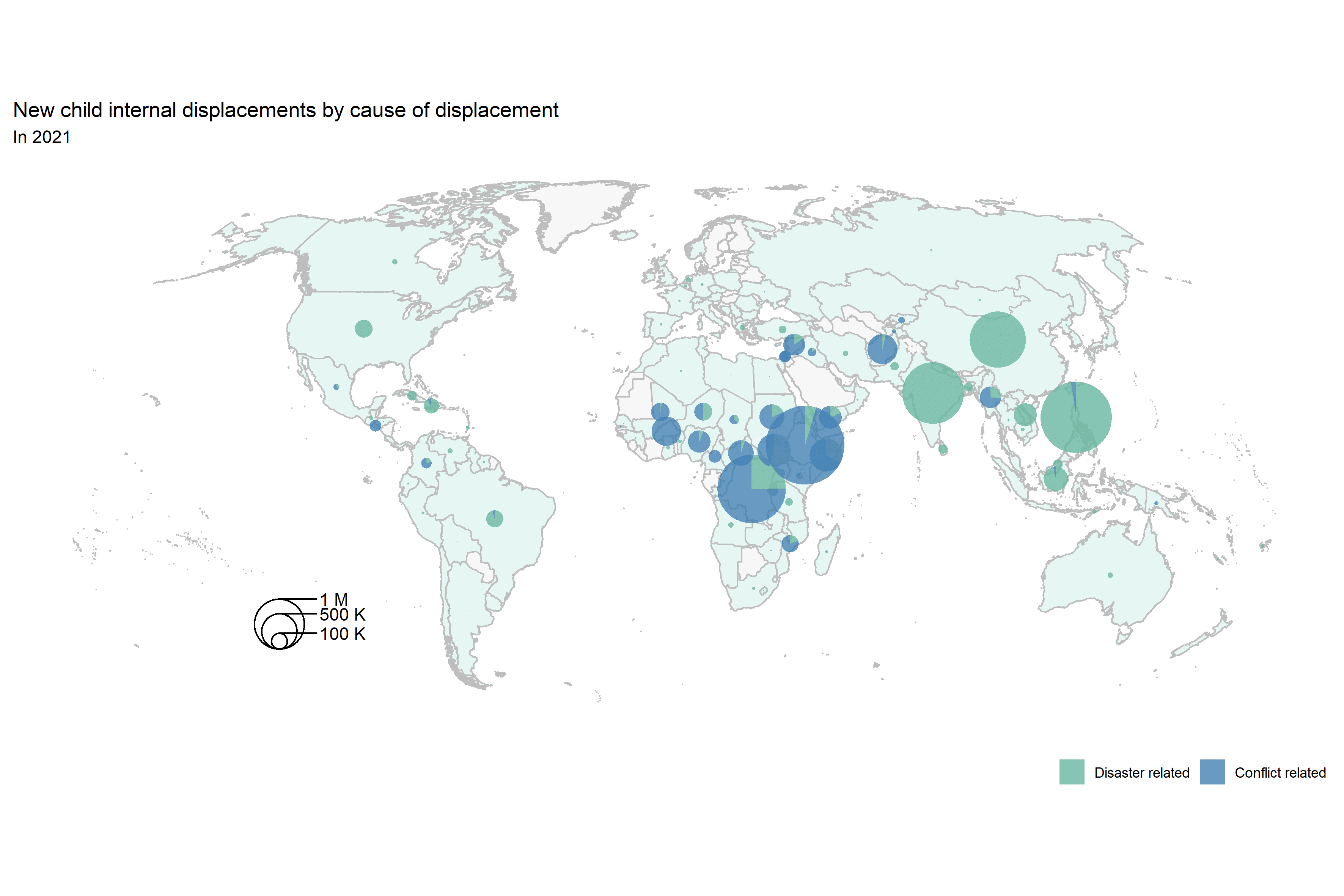 Stronger Data, Brighter Futures: Protecting children on the move with data and evidence

Missing from the story: The urgent need for better data to protect children on the move

Migrant and displaced children in the age of COVID-19

Lost at home: The risks and challenges for internally displaced children and the urgent actions needed to protect them

A right to be heard – interactive dashboard

Data snapshot of migrant and displaced children in Africa

A Call to Action: Protecting children on the move starts with better data

Notes on the data

International migrants: Persons living in a country or area other than their country of birth.

Refugees: Person who are outside their country of nationality or habitual residence, who cannot return due to a well-founded fear of being persecuted because of their race, religion, nationality, membership of a particular social group or political opinion. This number only accounts those who have been recognized as refugees or find themselves in refugee-like situations. Data are presented in thousands.

Asylum seeker: Persons whose application for asylum or refugee status is pending at any stage in the asylum procedure. If granted, persons are regarded as refugees. Data are presented in thousands.

Internal displaced persons: Persons who have been forced or obliged to flee or leave their homes or places of habitual residence, in particular as a result of or in order to avoid the effects of armed conflict, situations of generalized violence, violations of human rights or natural or human-made disasters, and who have not crossed an internationally recognized border. Data presented in this table refer only to persons displaced due to conflict and violence. Data are presented in thousands.

Ratification of key human right instruments: Number of legal instruments related to children and international migration ratified by each country. The legal instruments refer to: (a) the 1989 Convention on the Rights of the Child, (b) Convention relating to the Status of Refugees 1951 and Protocol 1967, (c) the 2000 Protocol to Prevent Suppress and Punish Trafficking in Persons, Especially Women and Children (d) the 2000 Protocol against the Smuggling of Migrants by Land, Sea, Air, (e) the 1990 International Convention on the Protection of the Rights of All Migrants and Members of Their Families. Data are expressed in numbers.

Comparable, reliable, timely, disaggregated and accessible data are essential for understanding and addressing the implications of migration for children and their families. Data need to cover a range of key questions, including who migrants and displaced persons are, how old they are, where they come from, when they move, where they move, why they move and how they fare.

A first step toward closing the data gaps about child migrants and refugees is identifying who and where those children are. Accounting for migrant children – especially refugee children – is fundamental for their protection. Beginning more than a decade ago, UNHCR declared unequivocally that ”the registration of children should always be a priority when registering persons of concern to UNHCR”. More consistent efforts to identify the origins and destinations of child refugees are also needed, including through the adoption of consistent and reliable techniques for determining the ages of children who arrive without documentation.  Population registers and censuses are essential tools for closing some of these gaps, particularly for non-refugee migrant children. As the predominant data source on international migration, every census should collect information on the country of birth, the country of citizenship, and the country of previous residence for respondents.

A second and equally important step toward closing data gaps is improving information about the well-being of children impacted by migration and displacement. Outcomes related to water and sanitation, education, gender, child protection, social inclusion and health need to be assessed for migrant and refugee children and considered in relation to the outcomes to native-born children. Data disaggregated by migratory status will be particularly relevant to monitor progress toward the Sustainable Development Goals for children and families in vulnerable situations. To bolster the overall quality of information about the well-being and progress of migrant children, pertinent administrative data should be more accessible and household surveys should be adjusted to include relevant migration questions. New technologies and data sources also have tremendous potential to improve current knowledge about migration movements. Data from social media, mobile phones and other sources can provide geo-spatial and temporal information about population movements in real time, facilitating timely and more responses for people on the move. Continued investment in both new and traditional data sources will be essential to effectively meeting the rights and needs of children and families in the years to come.