Children and youth on the move across the Mediterranean Sea, at risk of trafficking and exploitation

Young migrants and refugees set out to escape harm or secure better futures – and face staggering risks in the process. For children and youth on the move via the Mediterranean Sea routes to Europe, the journey is marked by high levels of abuse, trafficking and exploitation. Some are more vulnerable than others: those from sub-Saharan Africa, those travelling alone, those with low levels of education and those undertaking longer journeys.

These and more findings come from a joint report by UNICEF and IOM analysing the journeys of some 11,000 young refugees and migrants between 14 and 24 years old along the Eastern and Central Mediterranean routes to Europe.

The analysis reveals the interplay of factors – from origin and education to the trajectory and duration of their journey– that render them vulnerable to abuse, exploitation and trafficking. This report focuses on those heading to Europe – but echoes of their experiences and testimonies can be found among young migrants and refugees around the world. 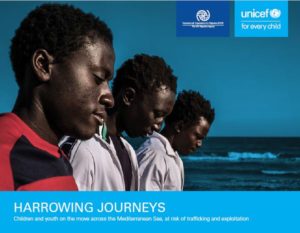 Children and youth migrating to escape harm or seek a better future find few safe and regular pathways. Regular migration channels – enabled by humanitarian, student or work visas, programmes for family reunification, or refugee resettlement– are limited, and closed to most. This leaves many with little choice but to engage smugglers to help them cross borders.

Adults upon whom children depend to assist them during their journeys – like the smugglers they may hire – may take advantage of their vulnerability. Children may fall victim to abuse and violence, or be trafficked into sexual exploitation or forced labour. Perpetrators range from smugglers and traffickers on the one hand, to border guards, militias or police on the other.

Proportion of respondents reporting exploitation of any type on the Central and Eastern Mediterranean route by age, 2016-2017

Those whose journeys take them along the Central Mediterranean route are at substantially higher risk of trafficking and exploitation, in large part because they travel through Libya, where state institutions are weak and lawlessness and violence widespread. Young migrants and refugees on this route are also more likely to experience exploitation because they often travel alone, spend more time in transit, and generally have less access to protective systems. 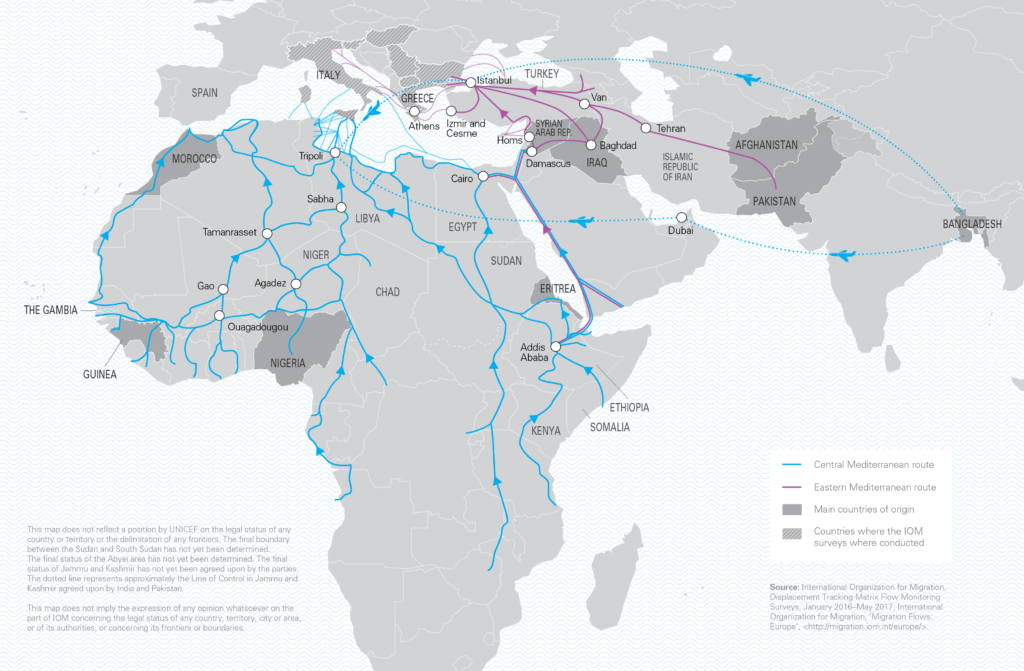 Many adolescents and youth experienced multiple types of exploitation

Many adolescents and youth reported not only having experienced exploitation on several occasions and in multiple places — but also different types of exploitation. This is in particularly true for migrants and refugees on the Central Mediterranean Route. 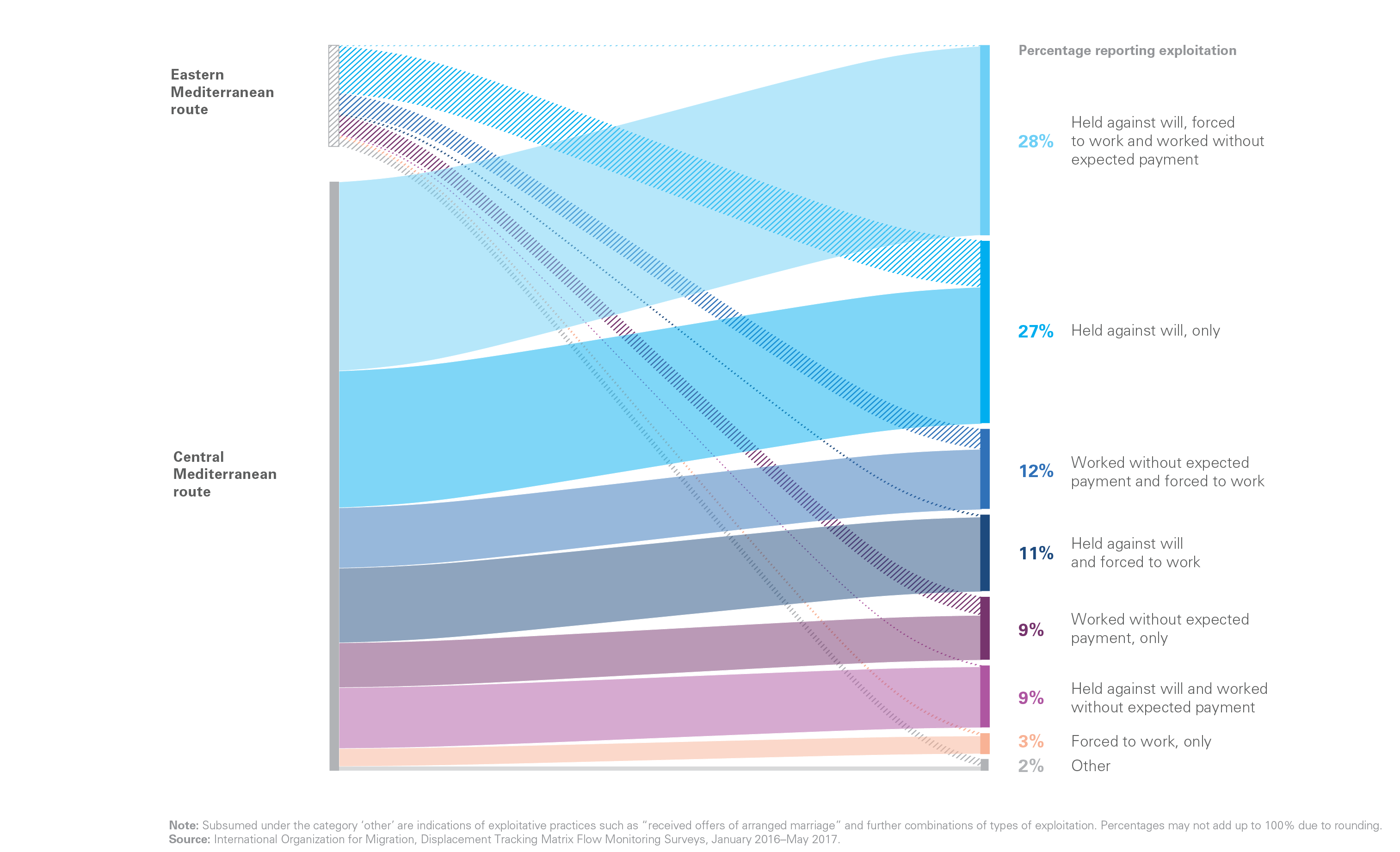 Sub-Saharan Africans are especially vulnerable. Over 80 per cent of adolescents and young people from sub-Saharan Africa traveling on the Central Mediterranean route reported exploitation – compared to around 55 per cent of those originating from elsewhere.

Percentage of respondents aged 14-24 reporting exploitation by region of origin, 2016-2017

Although additional years of education and travelling in a group afford young migrants and refugees on both routes a measure of protection, where they come from outweighs either of these factors. Calculating the predicted probability of exploitation using a logistic regression model, an adolescent boy from sub-Saharan Africa, who has secondary education and travels in a group along the Central Mediterranean route, faces a 73 per cent risk of being exploited. If he came from another region, the risk would drop to 38 per cent.

Anecdotal reports and qualitative research from the Mediterranean region and elsewhere suggest that racism underlies this difference. Countless testimonies from young migrants and refugees from sub- Saharan Africa make clear that they are treated more harshly and targeted for exploitation because of the colour of their skin.

Significant proportions of children seeking asylum in Europe either embarked on the journey without their families or lost them along the way. The proportion of unaccompanied and separated children is especially striking on the Central Mediterranean route, where they accounted for over 90 per cent of children (0–17) arriving in Italy in the first half of 2017. But traveling alone increases the risk of exploitation – on both the Central and the Eastern Mediterranean routes.

Proportion of respondents traveling alone or in a group reporting exploitation or abuse on the two routes by age, 2016-2017

Proportion of survey respondents reporting exploitation on the two routes by level of education and age, 2016-2017

What can be done?

The story that emerges from the data confirms the tragic reality that adolescents and youth are prepared to pay a high price for a chance at a better life. As the world continues to grapple with the reality of migration and displacement, the findings from this report underscore the urgent need for action. 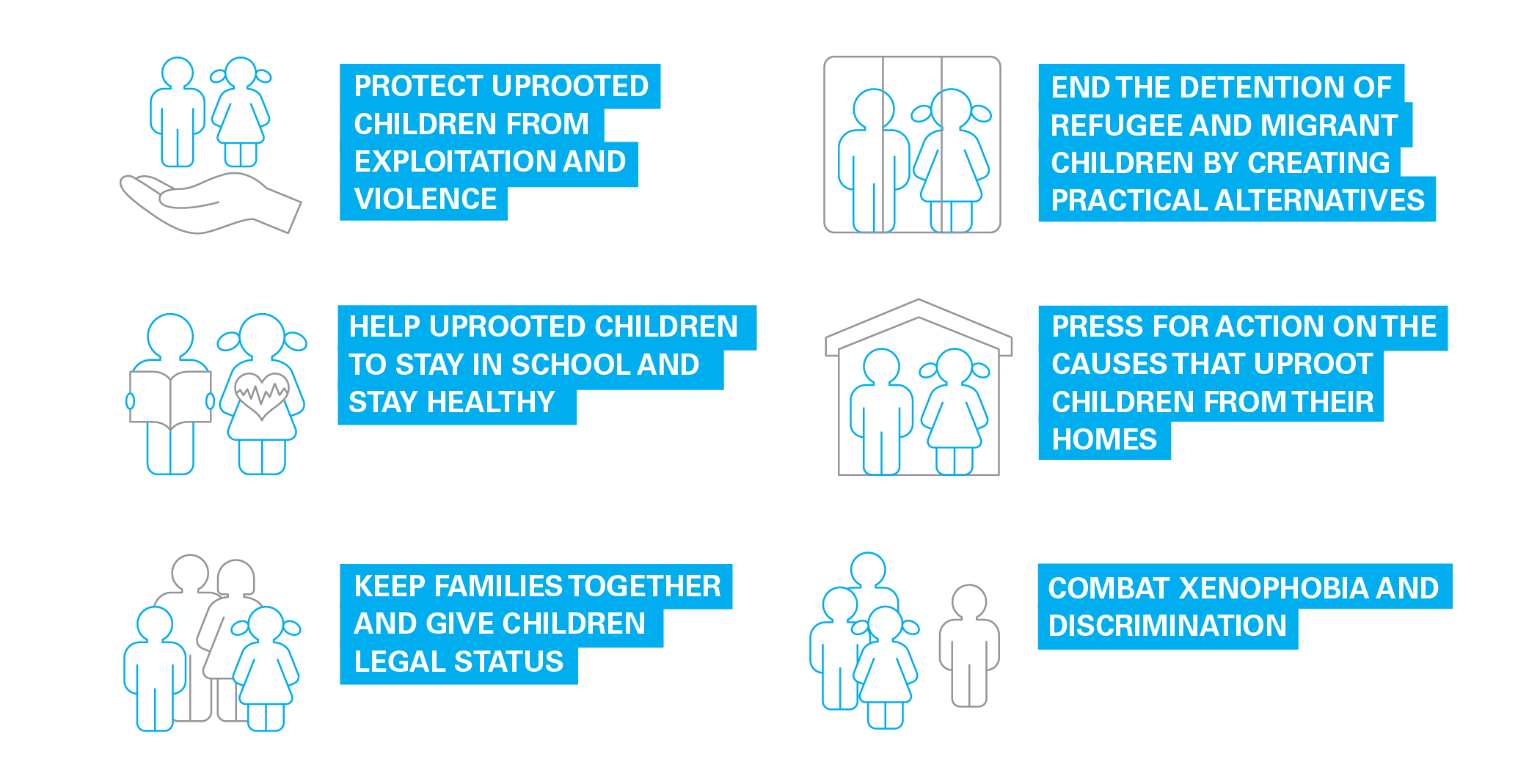 Such a strategy includes expanding safe and regular migration channels to dampen the demand for smugglers, while fighting trafficking and exploitation. To enhance the resilience and protect the rights of children and youth, it entails investing in education and other basic services, coordinating child protection efforts across countries, and fighting racism and xenophobia in the countries migrants and refugees travel through and the ones in which they seek to make their lives.

To protect the most vulnerable among those on the move, UNICEF and IOM call for a multi-pronged strategy that addresses the interplay of factors that expose migrant and refugee children and youth to risk – or help keep them safe.

Around the world, nearly 50 million children have migrated across borders or been forcibly displaced –…
keyboard_arrow_right Read more

Among the millions of children on the move worldwide, many – including hundreds of thousands…
keyboard_arrow_right Read more