Coverage at a crossroads: New directions for vitamin A supplementation programmes

For children living in countries where under-five mortality is high and vitamin A deficiency is a public health problem, vitamin A supplementation (VAS) provides vital protection from blindness and decreases their risk of dying from preventable causes such as measles and diarrhoea.[1]  During much of early childhood – from 6 months to 5 years of age – two high-dose supplements of vitamin A per year, spaced four to six months apart, can strengthen the immune systems and improve chances of survival.[2]

Like all forms of malnutrition, vitamin A deficiency is a marker of inequality. In countries where diets are lacking in vitamin A and infections and deaths are common, supplementation programmes give vulnerable children a better chance to survive, develop and thrive.

Since the year 2000, global efforts to scale up VAS programmes have yielded dramatic improvements in coverage, contributing to drops in child mortality.[1-3] Yet today, VAS programmes are in crisis.

This UNICEF report, Coverage at a Crossroads: New directions for vitamin A supplementation programmes, is an effort to sound the alarm.

Global coverage of vitamin A supplementation has dropped to a shocking six-year low, leaving more than one third of children unprotected from the devastating effects of vitamin A deficiency – and stark inequities remain in reaching the children most in need. As VAS delivery shifts and countries lose platforms that they have relied on to successfully deliver vitamin A in the past, the need to chart new directions for the future of VAS programmes has never been more urgent.

Vitamin A supplements offer powerful lifesaving protection: they can reduce child mortality by at least 12 per cent.[3]

In 2016, 64 per cent of children in need in priority countries were reached with two doses of vitamin A – but more than 141 million children were left behind, leaving them vulnerable to disease and death. The situation is most alarming in West and Central Africa, where two-dose coverage was the lowest of all regions in 2016, reaching just more than half of children in need. 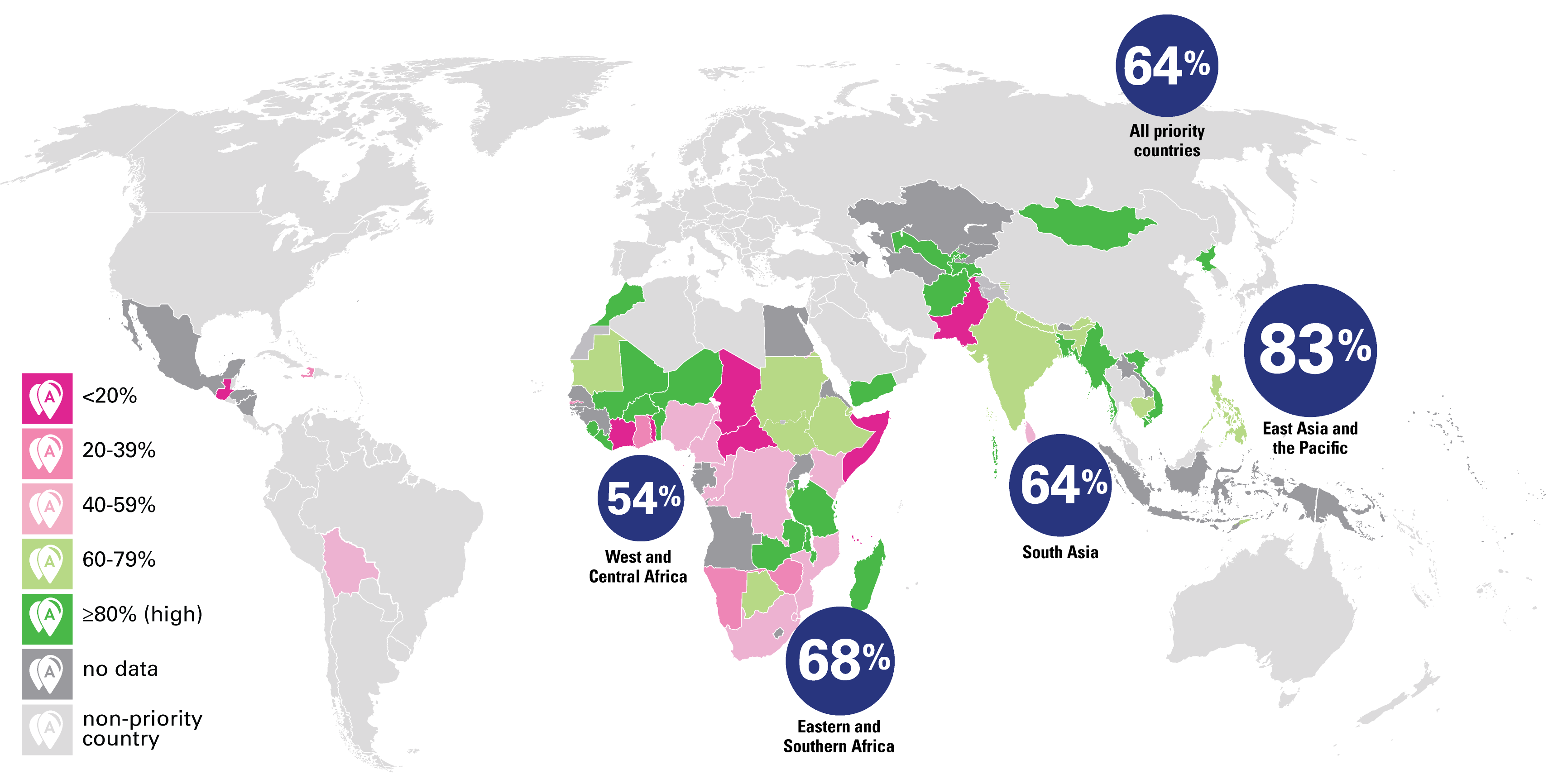 Global coverage dropped to a six-year low in 2016. At the same time, wide fluctuations in coverage in short time spans are apparent in a number of regions, particularly those with weak routine health systems, such as West and Central Africa, South Asia and Eastern and Southern Africa, leaving vulnerable lives unprotected.

VAS programmes reduce mortality in populations suffering from vitamin A deficiency.[3] Many of the countries with the highest under-five mortality rates are fragile contexts where health systems are weak, meaning that children have an even greater need for the life-saving protection of VAS. In these contexts, children are dying from preventable infections, and VAS can help safeguard their bodies against illness and strengthen their resilience.

Between 2015 and 2016, VAS coverage dropped by more than half in countries with the highest under-five mortality – the same countries where it is needed the most. Consequently, the number of children left unprotected more than tripled in high-mortality countries during this period, increasing from 19 million to 62 million.

Globally, VAS programme sustainability is fragile, with wide variability in the coverage levels achieved by individual countries over time. Less than one third of priority countries were able to achieve high coverage in at least 8 of the previous 10 semesters.

Coverage variability highlights the need to ensure that VAS programmes are a part of the broader health systems approach and well-integrated into the planning, financing and delivery of health and nutrition services.

A world without vitamin A deficiency is possible. Yet until nutritious diets are a reality for every child, VAS is a powerful solution for saving lives. Since 2000, the dramatic scale-up of VAS programmes has protected millions of children from the devastating consequences of vitamin A deficiency.  Yet today, progress in reaching all targeted children has halted and risks backsliding.

It is not too late to re-chart the future of VAS programmes. But if we fail to act now, we will lose our hard-won progress and jeopardize the lives of millions of children. As the world mobilizes towards the 2030 Agenda for Sustainable Development – and particularly the target of ending preventable deaths in children under age 5 – there has never been a better time to reprioritize this safe, cost-effective and evidence-based intervention.

[3] Imdad, A., et al., ‘Vitamin A supplementation for preventing morbidity and mortality in children from six months to five years of age’, Cochrane Database of Systematic Reviews, no. 3, 10 March 2017.