The 2030 Agenda for Sustainable Development commits UN member states to take bold and transformative steps to ‘shift the world onto a sustainable and resilient path’, ‘realize the human rights of all’, ‘end poverty in all its forms’, and ensure ‘no one will be left behind’. Since 2000, billions of people have gained access to basic drinking water, sanitation and hygiene services, but many countries still have a long way to go to fully realize the SDG ambition to achieve ‘universal’ access ‘for all’. The WHO/UNICEF JMP report, Progress on household drinking water, sanitation and hygiene, assesses the progress made at the national, regional and global levels in reducing inequalities in household WASH services for the period 2000-2017 and identifies the populations most at risk of being left behind.

1 in 3 people or 2.2 billion people around the world lack safe drinking water

In 2017, 71 per cent of the global population used safely managed drinking water services. National estimates were available for 117 countries and four out of eight SDG regions, representing 38 per cent of the global population. Coverage was lower in rural areas (53 per cent) than in urban areas (85 per cent), which were home to two out of three of the 5.3 billion people using safely managed services. By 2017 a total of 80 countries had achieved greater than 99 per cent coverage and were therefore classified as having “nearly universal” coverage of at least drinking water services.

Over half of the global population or 4.2 billion people lack safe sanitation

In 2017, 45 per cent of the global population (3.4 billion people) used safely managed sanitation services. National estimates were available for 92 countries and six out of eight SDG regions, representing 54% of the global population. Coverage was higher in urban areas (47 per cent) than in rural areas (43 per cent), and two thirds of the population using safely managed services lived in urban areas. Seven out of ten people who still lacked even basic services lived in rural areas, while one third lived in Least Developed Countries.

The number of people practising open defecation globally decreased by 696 million between 2000 and 2017, with countries in Central and South Asia accounting for nearly three quarters of this reduction (496 million). Eastern and South Eastern Asia and Sub-Saharan Africa recorded reductions of 70 million and 58 million respectively. However, over the same period 39 countries recorded net increases in the number of people practising open defecation totaling 49 million. These included countries experiencing rapid population growth and were mostly concentrated in Sub-Saharan Africa.

Many countries have increased basic coverage to water, sanitation and hygiene services but relatively few have reduced the gap between the richest and poorest

New data on service levels reveal significant inequalities in the accessibility, availability and quality of drinking water received by people living in rural and urban areas and different sub-national regions and by the richest and the poorest in each country. In the small number of countries that have disaggregated data available for all three criteria of safely managed drinking water services, significant differences are observed between urban and rural areas.

In almost all countries, service levels are higher in urban areas than in rural areas, but different patterns of inequality are observed. For example, accessibility is equally low in rural (4 per cent ) and urban (16 per cent) areas of Uganda, whereas in Ethiopia there is a 67 percentage point gap between rural (5 per cent) and urban (72 per cent). In Nicaragua, the gap in service levels between urban and rural exceeds 40 percentage points for two out of three SDG criteria, while in Nepal the gaps between urban and rural are small. In Paraguay, urban and rural areas have similar levels of accessibility and availability but there is a 21 percentage point gap in water quality. 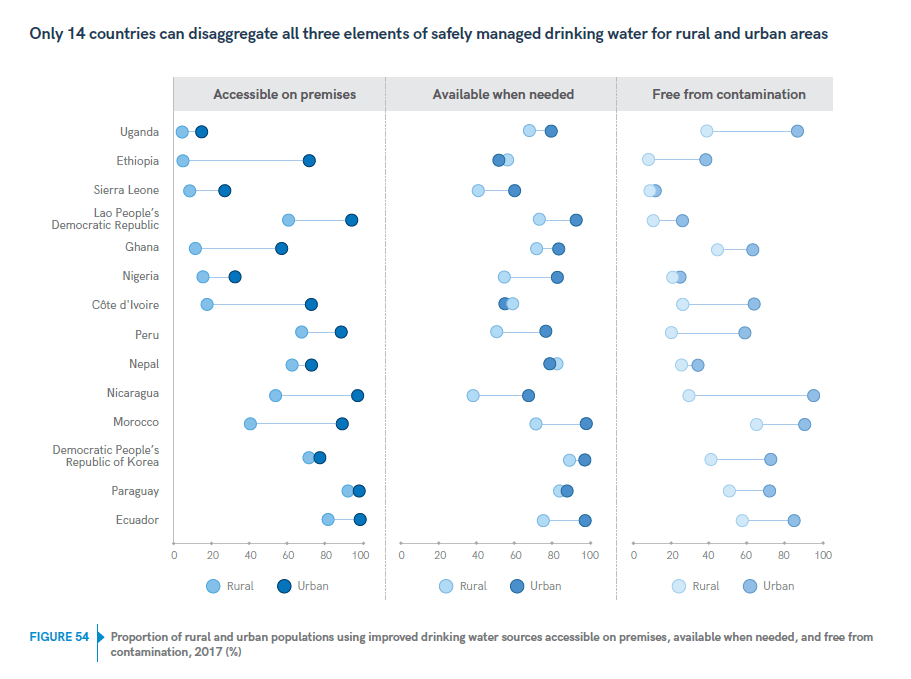 Access the story: 10 things you didn’t know about water