What and how children are fed in early childhood determines their survival and shapes their growth, development and learning for the rest of their lives. But millions of children – especially the youngest, the poorest and the most marginalized – do not have access to the minimum nutritious foods they need during the time in their lives when good nutrition matters most.

What is child food poverty?

Simply put, child food poverty is a situation where young children are not fed the minimum diverse diet they need in early childhood to grow and develop to their full potential.

UNICEF measures child food poverty using the UNICEF-WHO children’s dietary diversity score in early childhood. UNICEF and WHO define minimum dietary diversity as the percentage of children 6–23 months of age consuming foods and beverages from at least five out of eight defined food groups during the previous day.

UNICEF defines children living in food poverty as the percentage of children under five years of age consuming foods and beverages from four or fewer of the eight defined food groups.

Severe child food poverty refers to the percentage of children under 5 consuming foods and beverages from zero, one or two out of eight defined food groups during the previous day.

Moderate child food poverty refers to the percentage of children under five 5 consuming foods and beverages from three or four out of eight defined food groups during the previous day.

The situation around the world

Across the globe, millions of families are struggling to provide their children with the nutritious food they need to grow, develop, and learn. Today in low- and middle-income countries, 2 in 3 children under five – or 478 million – experience food poverty. These children are not fed the minimum diverse diet they need to grow and develop to their full potential.

Even more worrisome, 1 in 3 children under five – or 202 million – live in severe food poverty, meaning they are fed extremely poor diets that include at most two food groups, often a cereal and perhaps some milk. Globally, nearly 90 per cent of children living in severe food poverty are fed breastmilk/ dairy with starchy staples – diets that are severely lacking in nutrient-rich foods such as eggs, fish, poultry, meat, pulses, nuts, fruits and vegetables.

The situation stands to worsen as the world grapples with a crushing global food and nutrition crisis that is taking the greatest toll on the most vulnerable children and families. 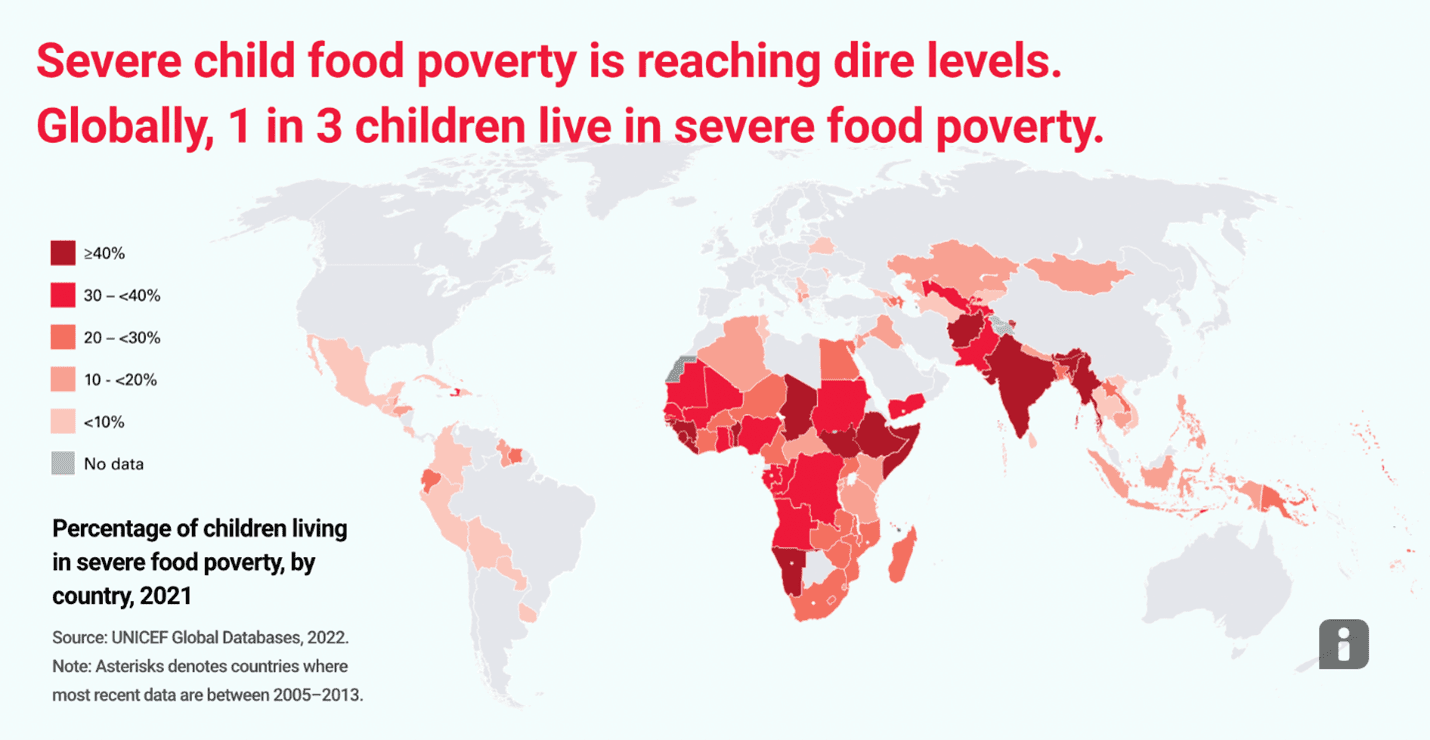 Governments must take the lead to end child food poverty. Together with development and humanitarian partners, national and international civil society and non-governmental organizations, and the private sector, governments must mobilize the food, health and social protection systems to deliver nutritious, safe and affordable foods and essential nutrition services.