Violence in the lives of children and adolescents

Beyond the unnecessary hurt and pain it causes, violence undermines children’s sense of self-worth and hinders their development.

A Familiar Face: Violence in the lives of children and adolescents uses the most current data to shed light on four specific forms of violence: violent discipline and exposure to domestic abuse during early childhood; violence at school; violent deaths among adolescents; and sexual violence in childhood and adolescence.

The statistics reveal that children experience violence across all stages of childhood, in diverse settings, and often at the hands of the trusted individuals with whom they interact on a daily basis.  Ensuring that violence in all its forms is recognized as a fundamental violation of children’s human rights and documented through solid data is a first step towards its elimination. 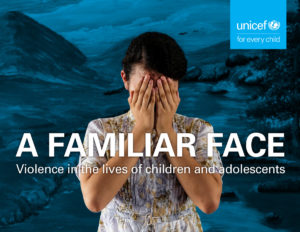 One need not look far to find violence in the lives of children.

A child’s first experience of human interaction typically occurs at home, in a positive, nurturing and loving context. However, home is also the place where a child’s first exposure to violence is likely to occur.

A reality throughout childhood and adolescence

As children grow, they spend more time outside their homes and in online spaces. They begin to encounter and interact with more people, including peers and romantic partners. This widening of the social world, while beneficial in many respects, also creates situations in which children may be exposed to new forms of violence. Bullying is one example, experienced on a regular basis by close to 130 million students aged 13 to 15 worldwide.

In order to fully realize their potential, children need a safe, nurturing and inclusive environment in which to grow, learn, thrive and succeed. The Convention on the Rights of the Child explicitly mandates that children be protected from violent discipline while at school. Still, children living in 73 countries today lack full legal protection from this form of violence while at school. And even where it has been outlawed, its use may continue.

Violence is both common and widespread – and no society is without some level of violence against its children.  Data confirm that some types – such as violent discipline – negatively affect children from rich and poor households alike.

As girls and boys move through adolescence, they spend more time in an ever-expanding social environment and interact with a wider array of people.  Sexual violence against children can and does occur in countries of all incomes and development levels and can affect children at all ages and in different settings. While both boys and girls can be the target of sexual violence, data suggest that girls are generally at a heightened risk. Adolescence is a period of pronounced vulnerability, especially for girls.

The data also point to some groups of adolescents being at greater risk of violent death based on individual characteristics, such as sex and race.

The global homicide rate is four times higher among adolescent boys than girls. Perpetrators of homicide also reflect a distinctly gendered pattern: Males are much more likely to be killed by strangers. Almost half (47 per cent) of female homicide victims are killed by family members or intimate partners compared to about 6 per cent of males. [1]

A key reason why violence against children remains hidden is the reluctance of many victims to disclose their abuse, seek help to cope with the experience or take actions to protect themselves from further victimization. Findings from 30 countries confirm this, with only 1 per cent of adolescent girls who had experienced forced sex saying they had sought professional help. This reluctance on the part of victims to report incidents to authorities or other professionals poses a challenge to exposing the true extent and nature of violence against children. The reasons why are varied but can include fear of retaliation, guilt, shame, confusion, lack of confidence in the abilities or willingness of others to help, or lack of knowledge of available support services. Cultural and social norms can also drive a victim’s reluctance to come forward or can dictate to whom she or he is expected to look to for assistance.

The data and analysis presented in this report aim to influence the way we think and talk about the all-too-familiar faces of childhood violence. Governments, organizations and individuals everywhere should acknowledge the extent of violence against children, and intensify their efforts to end it.

Protecting children and adolescents against violence is a path toward more peaceful and inclusive societies, as called for by SDG 16. International commitment to the SDGs is a way of maintaining a sharp focus on this issue, both at the global and national levels.

We have the knowledge and the tools to prevent and respond to violence against children: It will take individual and collective action to right this global wrong.