Age plays a critical role in a child’s migration, but how will gender mediate that experience? Which gender-specific vulnerabilities, needs, and opportunities influence the lives of girls and boys on the move?

This report reviews the existing evidence base – official statistics and quantitative and qualitative studies from the community level to the global level – to shed light on these important questions. Examining the available information not only indicates where and how children on the move need targeted resources, support and protection, but also pinpoints areas needing further investigation.

Available data and research demonstrate that gender plays a pivotal role from the time the decision to leave home is made, and continues to shape experiences and vulnerabilities throughout the child’s journey and integration process at the destination. COVID-19 has added another layer of complexity to the lives of children on the move, exacerbating pre-existing insecurities in some dimensions and introducing new ones. Girls in particular are feeling many of these effects acutely, such as gender-based violence.

A snapshot of international child migrants

The number of persons living outside their country of birth or citizenship reached a record high of 281 million in 2020 – representing 3.6 per cent of the global population. Children younger than 18 accounted for 35.5 million of them and over a third, an estimated 13 million, were refugees and asylum seekers.

Around 9.0 million child migrants lived in the Middle East and North Africa in 2020 – 54.3 per cent were boys. Western Europe also showed a more pronounced gender imbalance, with boys comprising 52.0 per cent of the 5.6 million child migrants. In most other regions, the numbers of boys and girls were more evenly distributed. Girls outnumbered boys in Eastern and Southern Africa (50.4 per cent) and in West and Central Africa (52.7 per cent).

Key findings from the report 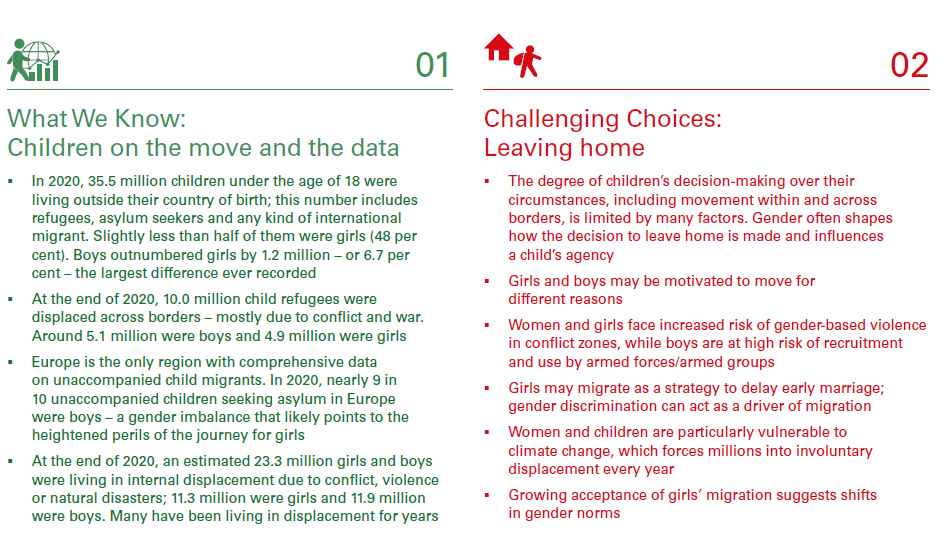