The State of Food Security and Nutrition in the World

World hunger is estimated to be on the rise again as conflict and human-induced disasters as well as natural disasters are contributing to setbacks in food security.This year’s The State of Food Security and Nutrition in the World (SOFI) warns that the long-term declining trend in undernourishment seems to have come to a halt and may have reversed. Meanwhile, though progress continues to be made in reducing child malnutrition, millions of children are still stunted and wasted, and rising overweight and obesity are a concern in most parts of the world.  One of the best starts in life, exclusive breastfeeding, has increased in many countries, yet it remains below desired levels.  For the first time, this year’s report is published by an expanded partnership, with UNICEF and WHO now joining FAO, IFAD and WFP. 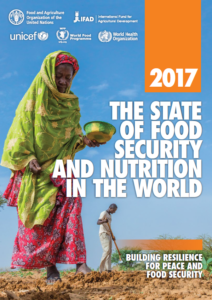 After a prolonged decline, world hunger is estimated to be on the rise again

Prevalence of undernourishment in percent: 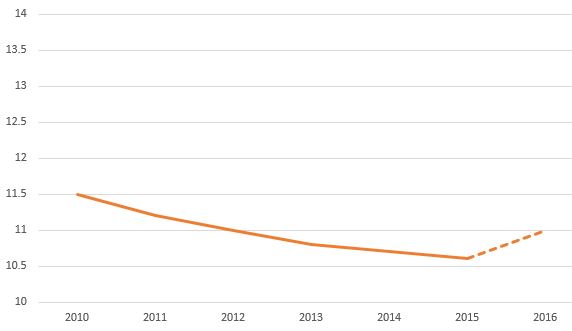 Note: Figures for 2016 are projected estimates and not based on the same methodology as the 2010-2015 estimates.  Source: FAO

Exclusive breastfeeding is a cornerstone of child survival

Breastfeeding provides essential irreplaceable nutrition for a child’s physical and cognitive growth. Breastfeeding helps to reduce child mortality, improve nutritional status, prevent common childhood illnesses and non-communicable diseases, and improve development and learning. It is considered to be the preventive intervention with the single largest impact on child survival.

Improved rates of breastfeeding directly contribute to ending hunger and child malnutrition, and increasing the rate of exclusive breastfeeding by up to 50 per cent in the first six months of life is one of the global nutrition targets endorsed by the WHA. Globally, 43 percent of infants younger than six months were exclusively breastfed in 2016, up from 36 percent in 2005.

Exclusive breastfeeding rates have increased dramatically in many countries, yet remains below desired levels.

Trends in all forms of malnutrition

Despite significant progress achieved over the last decade in reducing malnutrition and stunting, millions of children around the world are still at deadly risk.

155 million children under the age of five – one in every four children in that age group — suffer from stunting, their bodies and minds, affected.

52 million children – eight per cent of the world’s children  – suffer from wasting or low weight for their height.

Prevalence of stunting, wasting and overweight

As this year’s report shows, the situation is especially urgent for children trapped by the conflicts scarring the world today including the millions of children across northeast Nigeria Somalia, South Sudan and Yemen.

These children are innocent victims of a deadly combination of protracted conflicts, of drought, poverty and climate change. Living through crises defined not only by hunger and ruined crops — but by preventable diseases like cholera and measles as well as displacement and interrupted education.

To address these urgent needs we need to support governments not only in making nutrition a priority, but also in developing and implementing policies, programmes and systems that help deliver nutrition to the children at greatest risk including: